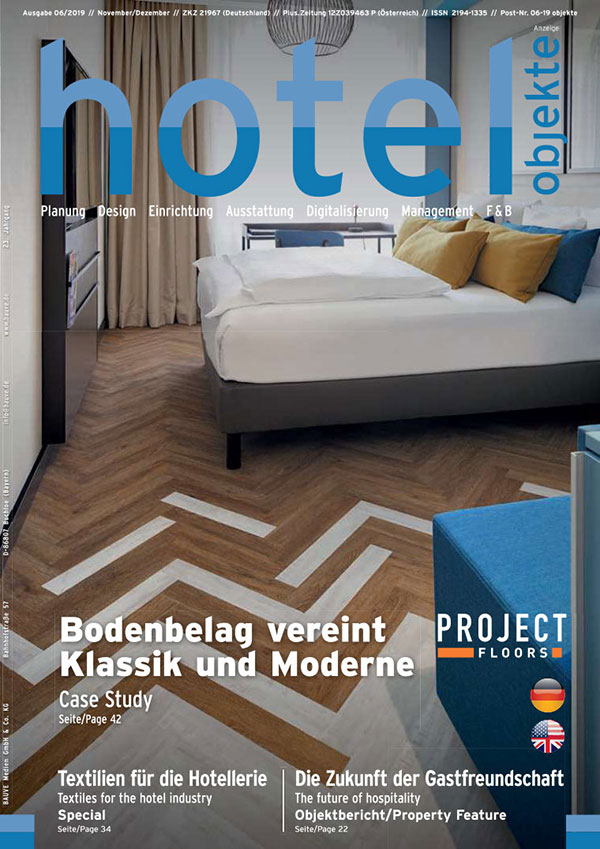 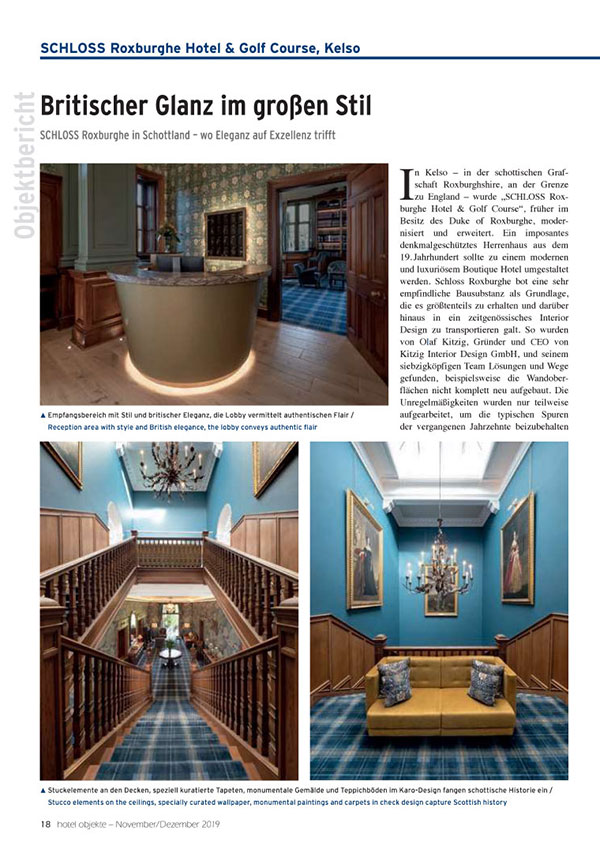 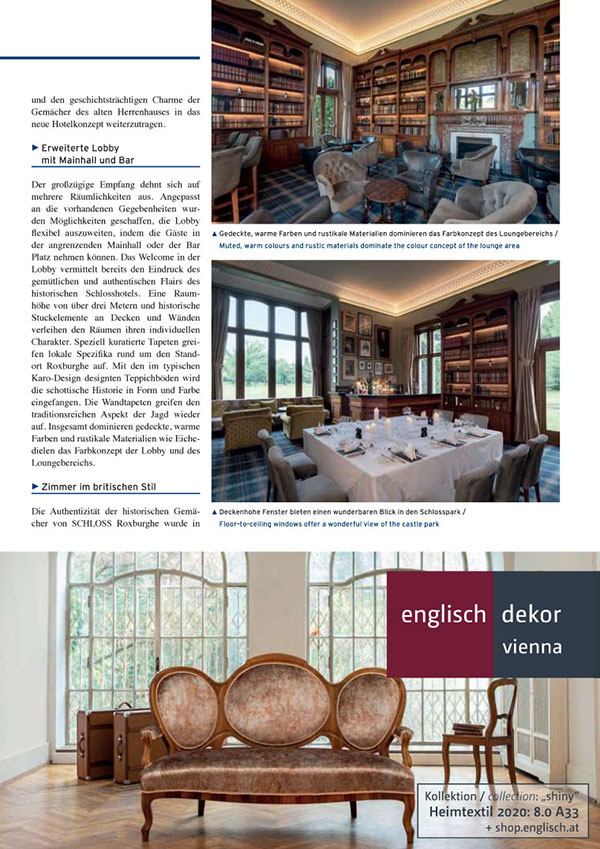 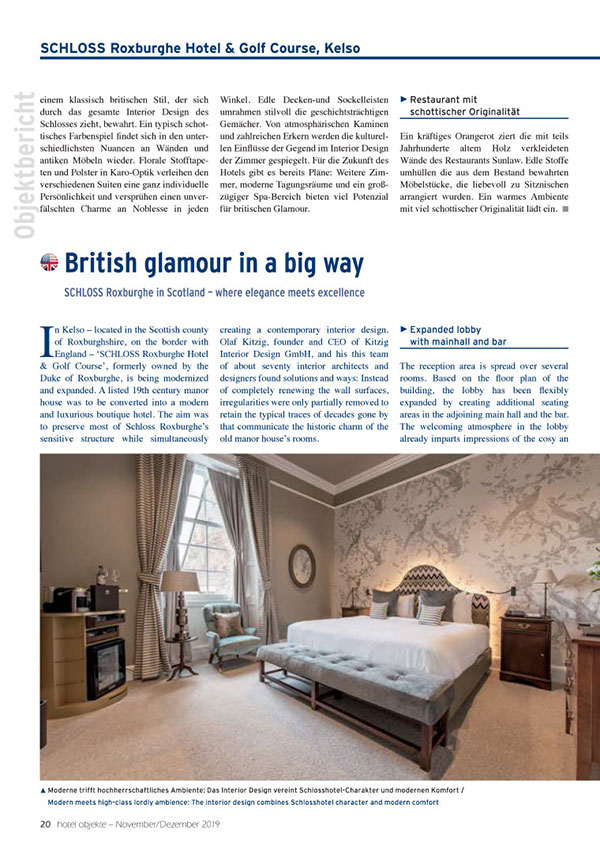 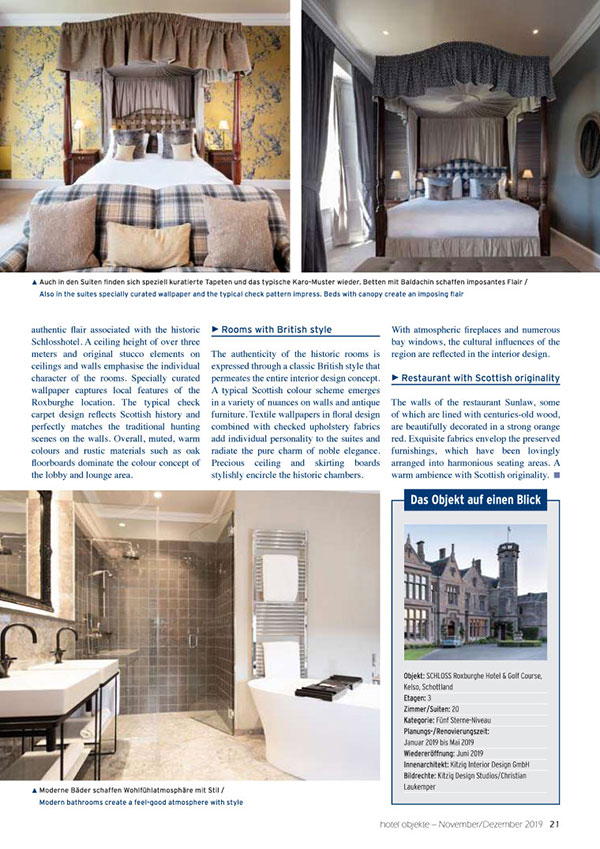 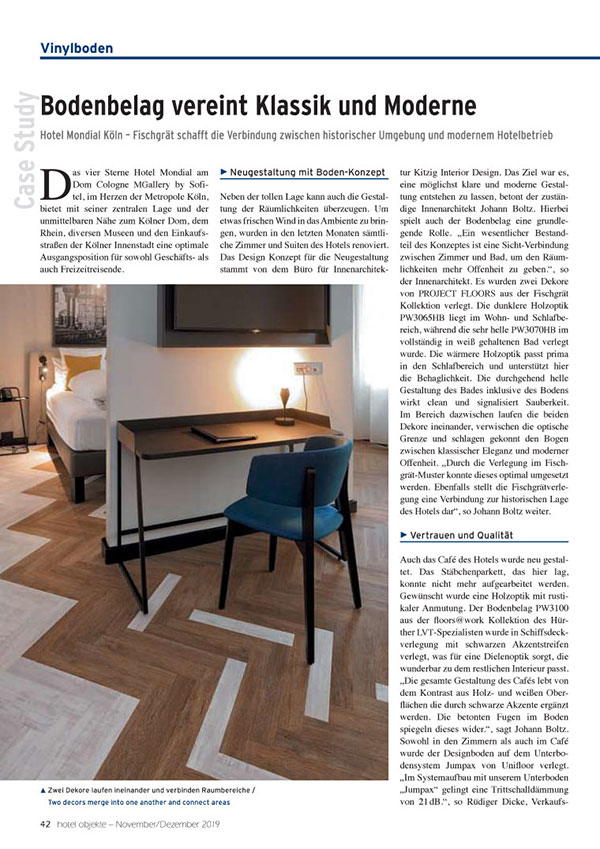 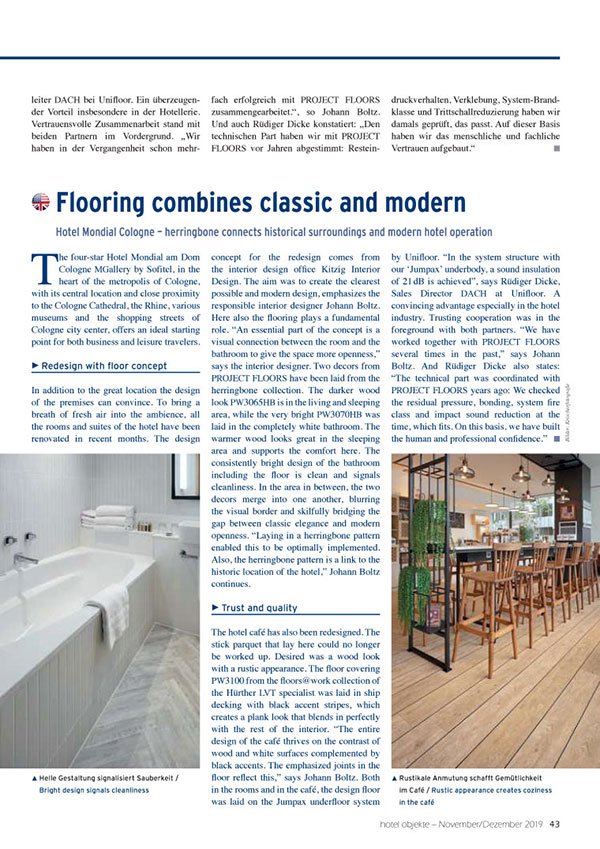 In Kelso – located in the Scottish county of Roxburghshire, on the border with England – ‚SCHLOSS Roxburghe Hotel & Golf Course‘, formerly owned by the Duke of Roxburghe, is being modernized and expanded. A listed 19th century manor house was to be converted into a modern and luxurious boutique hotel. The aim was to preserve most of Schloss Roxburghe’s sensitive structure while simultaneously creating a contemporary interior design. Olaf Kitzig, founder and CEO of Kitzig Interior Design GmbH, and his team of about seventy interior architects and designers found solutions and ways: Instead of completely renewing the walls surfaces, irregularities were only partially removed to retain the typical traces of decades gone by that communicate the historic charm of the old manor house’s rooms.

Expanded lobby with mainhall and bar
The reception area is spread over several rooms. Based on the floor plan of the building, the lobby has been flexibly expanded by creating additional seating areas in the adjoining main hall and the bar. The welcoming atmosphere in the lobby already impacts impressions of the cosy and authentic flair associated with the historic Schlosshotel. A ceiling height of over three meters and original stucco elements on ceilings and walls emphasise the individual character oft he rooms. Specially curated wallpaper captures local features of the Roxburghe location. The typical check carpet design reflects Scottish history and perfectly matches the traditional hunting scenes on the walls. Overall, muted, warm colours and rustic materials such as oak floorboards dominate the colour concept of the lobby and lounge area.

Rooms with British style
The authenticity of the historic rooms is expressed through a classic British style that permeates the entire interior design concept A typical Scottish colour scheme emerges in a variety of nuances on walls and antique furniture. Textile wallpapers in floral design combines with checked upholstery fabrics add individual personality to the suites and radiate the pure charm of noble elegance. Precious ceiling and skirting boards stylishly encircle the historic chambers. With atmospheric fireplaces and numerous bay windows, the cultural influences oft he region are reflected in the interior design.

The four-star Hotel Mondial am Dom Cologne MGallery by Sofitel, in the heart oft he metropolis of Cologne, with its central location and close proximity to the Cologne Cathedral, the Rhine, various museums and the shopping streets of Cologne city centre, offers an ideal starting point for both business and leisure travelers.

Redesign with floor concept
In addition to the great location the design of the premises can convince. To bring a breath of fresh air into the ambience, all the rooms and suites oft he hotel have been renovated in recent months. The design concept fort he redesign comes from the interior design office Kitzig Interior Design. The aim was to create the clearest possible and modern design, emphasizes the responsible interior designer Johann Boltz. Here also the flooring plays a fundamental role. „A essential part oft the concept is a visual connection between the room and the bathroom to give the space more openness,“ says the interior designer. Two decors from PROJECT FLOORS have been laid from the herringbone collection. The darker wood look PW3065HB is in the living and sleeping area, while the very brigth PW3070HB was laid in the completely white bathroom. The warmer wood looks great in the sleeping area and supports the comfort here. The consistently bright design oft he bathroom including the floor is clean and signals cleanliness. In the area in between, the two decors merge into one another, blurring the visual border an skilfully bridging the gap between classic elegance and modern openness. „Laying in a herringbone pattern enabled this to be optimally implemented. Also, the herringbone pattern is a link to the historic location of the hotel,“ Johann Boltz continues.

Trust and quality
The hotel café has also been redesign. The stick parquet that here could no longer be worked up. Desired was a wood look with a rustic appearance. The floor covering PW3100 from the floors@work collection oft he Hürther LVT specialist was laid in ship decking with black accent stripes, which creates a plank look that blends in perfectly with the rest oft the interior. „The entire design oft he café thrives on the contrast of wood and white surfaces complemented by black accents. The emphasized joints in the floor reflect this,“ says Johann Boltz. Both in the rooms and in the café, the design floor was laid on the Jumpax underfloor system by Unifloor. „In the system structure with our ‚Jumpax‘ underbody, a sound insulation of 21 dB is achieved“, says Rüdiger Dicke, Sales Director DACH at Unifloor. A convincing advantage especially in the hotel indurstry. Trusting cooperation was in the foreground with both partners. „We have worked togehter with PROJECT FLOORS several times in the past“, says Johann Boltz. And Rüdiger Dicke also states: „The technical part was coordinated with PROJECT FLOORS years ago: We checked the residual pressure, bonding, system fire class and impact sound reduction at the time which fits. On this basis, we have built the human and professional confidence.“